Texas is known for pioneering oil barons whose business acumen frequently takes a back seat to their larger than life personalities.  But at some point the blustery sale pitches, ten gallon hats and six shooter personalities all seem to fade together.  And that's when a different kind of Texas businessman gets the spotlight...like East Texas chicken magnate Bo Pilgrim.

With his matter-of-fact demeanor and deadpan delivery, his commercials for "Pilgrim's Pride" chicken quickly became staple of 80s and 90s TV.  His business dealings and charitable work also made him a big part of the East Texas community, particularly in Pittsburgh, TX.

He passed away earlier this year but his presence can still be felt in the area.  At the Northeast Texas Rural Heritage Museum in Pittsburgh his cardboard cutout stands tall in an exhibit of famous area residents, along with his trademark hat. 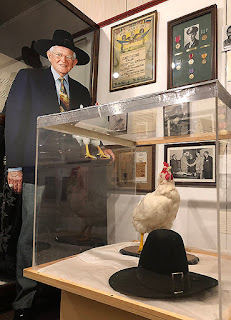 But the town has an even bigger tribute to the late meat packing mogul.  Outside the local chicken processing plant you'll find this giant bust of Pittsburgh's prominent poultry purveyor.  Feast your eyes on this roadside siren as it beckons you to pull over and snap a picture: 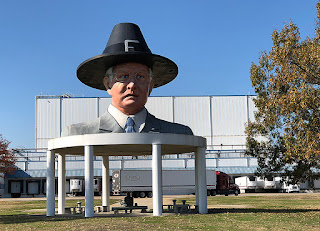 If that's not making a statement then I don't know what is.  The giant head of Bo Pilgrim welcomes(?) visitors coming in to town along Highway 271.  It kind of makes you wish for a Huntsville Sam Houston statue type of full scale version but for now we'll have to settle for the head and shoulders...and of course the old commercials:

Posted by Esteem Education Co. at 4:44 PM No comments:

Queen For a Day

Most businesses spend a fair amount of time and money on market research.  Before you roll out a new product you're going to want to make it as good as possible and to do that you need to test it out.  And that's what brought me to an East Texas Dairy Queen today. 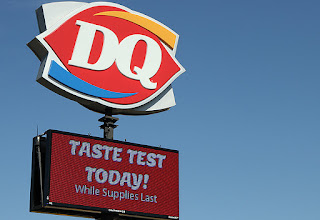 The DQ in Emory, TX was one of the four franchises in the entire state selected to take part in the experiment.  I was told it was because the manager is very active in giving feedback to corporate regarding what is and is not working.

So what exactly was on the tasting menu?  It turns out they have an interest in serving up a Buffalo Ranch Chicken Sandwich.  And it's pretty much what it sounds like: your standard chicken sandwich (fried or grilled) with Buffalo Sauce and Ranch Dressing.  While they headed to the kitchen to whip one up, they handed out the questionnaire: 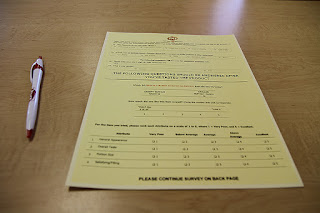 There were only a handful of questions and they were all pretty much straightforward: How did you like it?  Would you recommend it?  Etc. That's all you have to do to sing for your supper.  So here's what all the fuss is about: 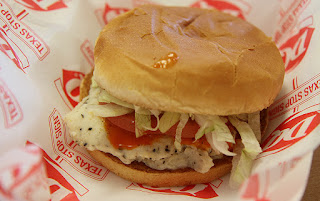 I got the "grilled" version.  You can definitely taste the buffalo sauce...I'll say that for it.  So I ate my sandwich, filled out the form and went on my way.  Will we end up seeing the Chicken Buffalo Ranch Sandwich at Dairy Queens across Texas?  Only time will tell..

Tyler, TX has had its fair share of visitors but one of the biggest stars of all time rolled into town today.  If you were at the Brookshires on Rice Street today you could have seen a commercial legend: 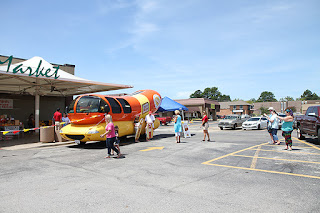 The Oscar Mayer Wienermobile wowed the crowds and served as a great backdrop for many new profile pics.  The legendary machine blasted the "Oh, I Wish..." theme and gave out Wiener Whistles and "I Saw the Wienermobile" stickers to excited fans. 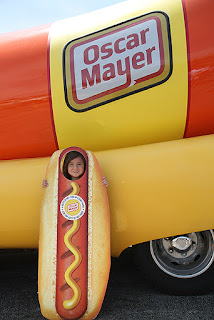 The Hotdoggers who drive the Wienermobile are making a few more stops around the Tyler area before heading to the Austin area.  If you want to track down the fantastic frankfurter when it comes to your neighborhood, I recommend using the official Wienermobile app: 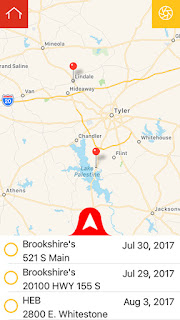 Posted by Esteem Education Co. at 1:51 PM No comments:

Years ago, as I kid, I showed Black Angus cattle at a variety of livestock shows across Texas.  Every summer brought us to the Van Zandt County Fair in Canton, TX and one of the definite highlights was getting burgers and ice cream at the Dairy Palace.  So it was with the high expectations of nostalgia that I return there for lunch. 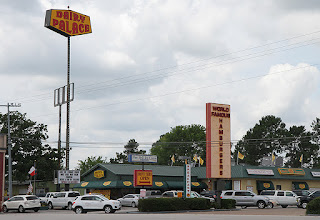 The place has been in business since 1984 and has a reputation of serving real food with real ingredients.  And it's not just the livestock show crowd that fills the booths.  Every First Monday this is the place to be.  And of course, the Canton regulars and I-20 travelers keep the place hopping in between. 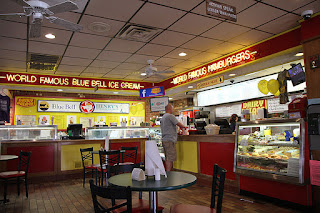 The menu is surprisingly extensive for a burger joint.  Sandwiches, salads, tacos and breakfast items are all in the mix as well as a daily special but, for me, the main event are the hamburgers.

But even then, there's a lot going on.  They grind their own beef in house but there's several more options.  They've got a big selection of wild game burgers including wild boar, elk, venison and duck.  On my latest trip I went with the Bison Burger: 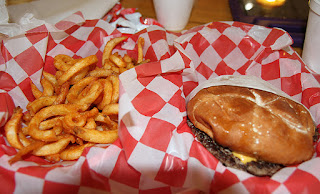 Too bad it doesn't photograph anywhere near as good as it tastes because this thing was phenomenal.   The huge patty (it dwarfed the bun...not that I minded) was perfectly seasoned and clearly fresh off the grill.

One of their mantras is that they begin preparing your food after your order and "The little bit of wait will be worth it!"  But I thought the order was turned around fairly quickly...and I was there with a six year old!  And after the burgers, she was ready for dessert. 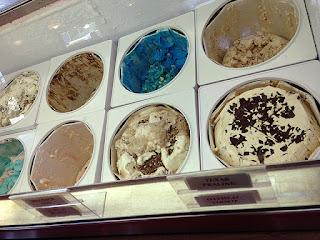 The "Dairy" in Dairy Place means ice cream.  And in Texas, "ice cream" means Blue Bell.  You can get an assortment of frozen treats like banana splits, sundaes and shakes but sometimes you just want a scoop or two on top of a cone.  They also offer Plano based Henry's Homemade Ice Cream and Chef's Line Ice Cream if you want to try something different. 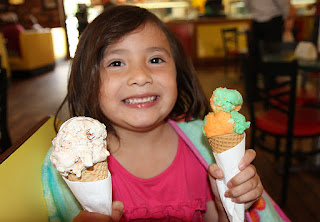 As you can probably guess, we left satisfied.  So if you're traveling along I-20 with an empty belly, make your way to Canton for some old fashioned refreshment.  And if the timing is right, pick up some antique "junk" at First Monday or stop by the Livestock Show to support youngsters like this little punk from the 80's: 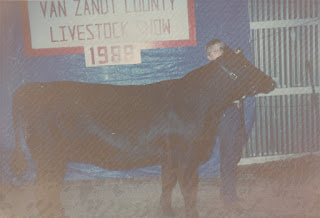 Posted by Esteem Education Co. at 7:12 AM No comments:

The recent storms on April 29 led to a tragic loss of life and property.  The small town of Emory, TX was hit as well as several other towns in the area.  After a rough night, I went out to survey some of the damage. 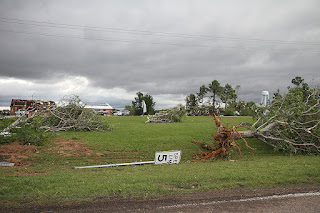 As usual, the community shined with legions of volunteers offering help and assistance to their neighbors.  It's been a few days now and the clean up still continues.  Yesterday the focus was on my in-laws house where several trees were knocked down (but, thankfully, no one was hurt). 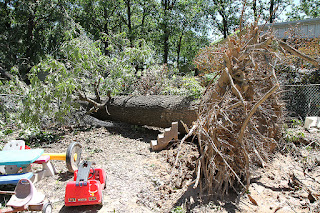 A few of the trees took out the back yard fence but other than that, the damage was minor.  There was one tree, however, that held an interesting surprise.  If the tree hadn't fallen then we would have never known that these little guys were living on the property: 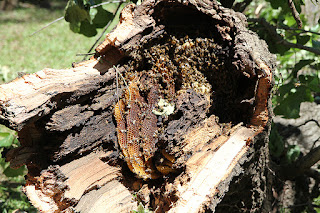 BEES!!!  Yikes!  So what do you do when you come across a giant beehive?  We had no idea.  Fortunately, we got a recommendation for Buffalo Creek Honey Bees from Lone Oak, TX.    We were lucky they were available and ready to roll. 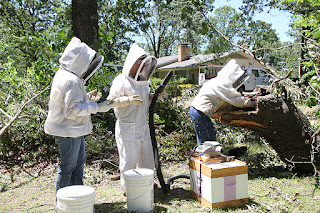 And of course we were there with the camera and they were kind enough to let us shoot video.  So if you've every wondered where honey comes from then click "Play"

Posted by Esteem Education Co. at 3:58 PM No comments:

Snakes on a Stage

This weekend is Eagle Fest in Emory, TX and, as usual, it's packed with events.  Unfortunately our schedule didn't allow us to shoot video for the podcast or to even attend for more than an hour or two.  But we were able to stop by to catch the Snake Encounters show and here are a few pics: 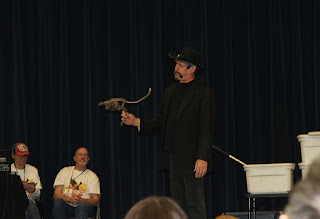 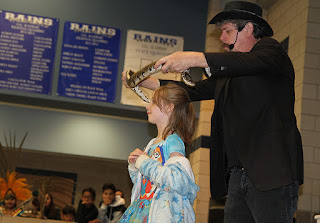 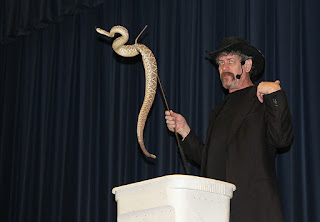 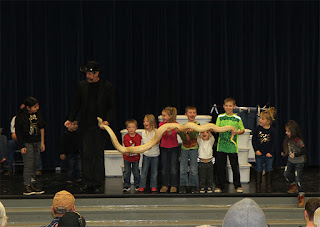 Hopefully next year we'll have more time to take in the rest of the Fest including seeing some real raptors instead of just our own little birds of prey:

Posted by Esteem Education Co. at 9:39 AM No comments:

Typically in East Texas (or across much of the U.S.) "Asian Cuisine" is usually found in strip mall buffets filled with radioactive red sweet sour & sauce and deep fried shrimp that would best be used as packing material.  Occasionally though, you can find the rare cherry blossom tree among the thorny briar patch of subpar "Take All You Want, Eat All You Take" establishments.  Which brings us to the Bamboo House in Bonham, TX: 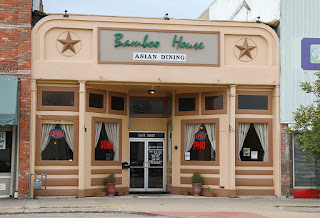 The outside windows boast "Sushi" and "Pho" so that's what we decided to try.  But the menu was fairly extensive and could surely provide enough options for the most eclectic groups of dining companions.  So let's head inside: 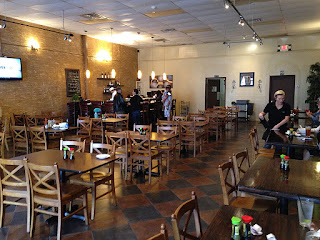 The mellow, intimate atmosphere easily lends itself to cozy conversations regarding menu selections and topics like: "Wow, that looks good!  Let me try some!"  We got there a little after the lunch rush so the crowds had gone which makes it hard to gauge the quickness of service with very few other patrons needing to be served.  But everything came out in a timely manner.  So let's start with the first course: 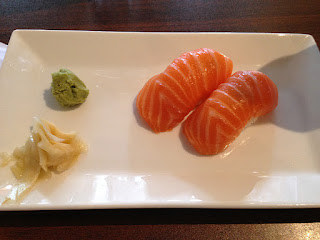 Let's start with something simple:  "Salmon Sushi."  It's a simple starter that's reasonably priced but it sets the scene for a satisfying meal in the simplest way: with the high caliber ginger and wasabi.  You might not think that there is a big difference between great garnishes and mediocre ones but the sinus clearing effect of even the tiniest amount of this wasabi proves that the good stuff makes a big difference.  Let's keep eating: 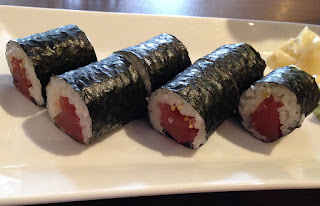 Course #2: "Tuna Roll"!  Sure, we're keeping it simple as far as sushi goes but it's not too hard to be hesitant when ordering raw fish this far away from the ocean.  But fortunately this one was also a winner and could easily go toe to toe (or fin to fin) with the equivalent from some fancy pants place.  Onward we go: 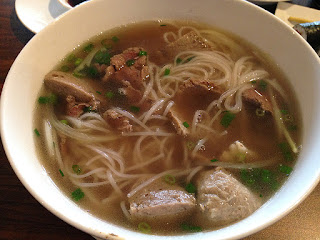 Final Course: "Pho Dac Biet"  We finished off our meal with a big bowl of their famous pho described in the menu as "Rice noodle soup w. special combination of steak, well done brisket, & meatballs"

The great tasting, flavorful broth compliments the three types of meat, each with their own unique taste.  It's a great finish to a not so common Texas meal and a great way to refuel on the road to your next adventure.

Posted by Esteem Education Co. at 7:37 AM No comments:

Check Out the Podcast!

Esteem Education Co.
Esteem Education Co, a non-profit 501 (c)(3) corporation, is dedicated to the production of science educational multimedia content and television programming, particularly in the realm of the earth sciences, including geology, geophysics, meteorology, geography, archaeology, and related fields of study. Esteem seeks to relate these academic studies to the lives of everyday viewers, and show how these topics effect our lifestyles and our environments.